Habits for Reducing the Risk of Dementia 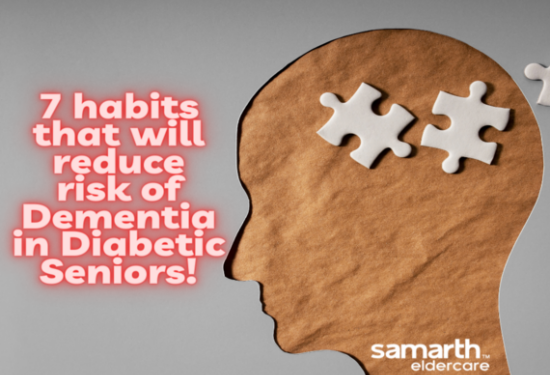 Diabetes, termed as the ‘silent epidemic’ by the World Economic Forum, has been responsible for almost three times as many deaths as from COVID-19. In India especially, since the incidences of diabetes in adults is so high that it is often called the ‘diabetes capital’ of the world. 14% of seniors in urban areas were reported to have the disease.

In a recent study conducted among adults with type 2 diabetes, it was revealed that practicing 7 lifestyle can reduce the risk of developing Dementia. The findings from the study were published in the Neurology, the medical journal of the American Academy of Neurology.

Multiple scientific studies have shown a compelling link between having type 2 diabetes and developing dementia, including Alzheimer’s disease.

“We investigated whether a broad combination of healthy lifestyle habits could offset that dementia risk and found that people with diabetes who incorporated seven healthy lifestyle habits into their lives had a lower risk of dementia than people with diabetes who did not lead healthy lives” said the author of the study Yingli Lu, MD, PhD, of Shanghai Jiao Tong University School of Medicine in China.

So what are those 7 lifestyle habits that researchers have found can reduce the risk of dementia in people with diabetes? Take a look below:

Not only is no-smoking a healthier habit in general, but studies have shown that compared to non-smokers, smokers were 30% more likely to develop dementia in general.

Moderate drinking in the research was defined as having up to one drink a day for women, and up to two dinks a day for men.

At least 2.5 hours of moderate exercise or 75 minutes of vigorous exercise weekly may help keep the mind active and sharp, whilst also improving memory and cognitive functions.

Getting sufficient hours of sleep is vital for good brain health. Research has shown that even one night of serious sleep loss raises the levels of certain proteins in the body that are linked to Alzheimer’s disease.

A Healthy Diet includes more fruits and veggies, whole grains and less of refined and processed foods. Lean protein such as fish and low-fat dairy also helps in mitigating the risk of dementia.

Leading a less sedentary lifestyle was defined in the research as watching television for less than four hours a day. It is also commonly known that sedentary behaviour raises the risk of dementia in older adults.

Frequent social contact was defined as living with others attending gatherings with friends and families at lest once a month and partaking in social engagements at least once a week or more.

Dr. Yingli Lu went on to add ““Our research shows that for people with type 2 diabetes, the risk of dementia may be greatly reduced by living a healthier lifestyle. Doctors and other medical professionals who treat people with diabetes should consider recommending lifestyle changes to their patients. Such changes may not only improve overall health, but also contribute to prevention or delayed onset of dementia in people with diabetes.”