Kiwi Fruit – No Less Than A Superfood 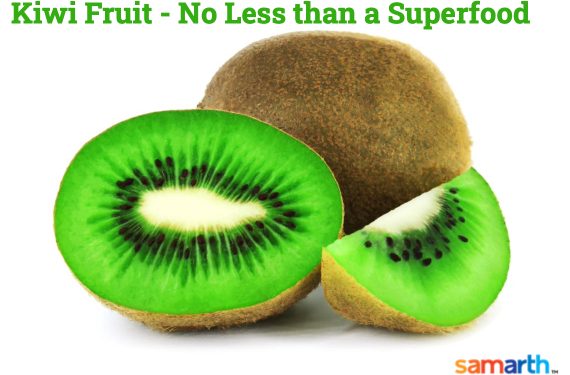 You must surely have picked up the Kiwi fruit a couple of times from the supermarket when you went for fruit and veggie shopping. This fruit became popular in India in the past decade or so and is considered one of those exotic foreign fruits. As you must have already guessed, Kiwi fruit comes from New Zealand; but did you know that it actually originated in our neighbouring country of China? Indeed, with its black little seeds inside, this tiny fruit used to be growing in China by the name of yang tao.

This was brought to the Kiwi shores by a New Zealand school principal Isabel Fraser, and they started calling it Chinese gooseberries. The name wasn’t much popular, and soon, it got renamed after the national animal of New Zealand and came to be known the world over as the Kiwi fruit. They are tiny, oval-shaped, mostly brownish/greenish, and has fuzzy skin. All parts of this fruit, including the peel, are edible.

The fruit contains a lot of fibre, Vitamin C, folate, copper, potassium, antioxidants, Vitamin E and Vitamin K. They taste great and are said to be a powerhouse of nutrients. The flesh is mostly green, though there are some golden yellow varieties also. It is now mostly grown in California, apart, of course, in New Zealand. Some even call it a superfood because of the immense health benefits that it possesses.

Kiwi fruits help regulate blood pressure and also prevent blood clotting. Thus, it can be a hearty-friendly fruit, as it was proven that it also has no negative effects on the cholesterol levels in the body. One study even proved that it is better than taking an apple a day! Also, they contain omega 3 fatty acids, carotenoids, polyphenols that promote heart health. So, there is sufficient indication that eating Kiwi fruits regularly can reduce the risks of strokes and heart attacks in the long run.

The high amount of Vitamin C and antioxidants present in the Kiwi fruit help fight asthma symptoms, which is a common problem for many, especially in the winter. Studies have proved that components in this fruit can help reduce wheezing in children. Besides, Vitamin C in this fruit is much more than that in oranges and lemons and can boost immunity like no other. This can help reduce the chances of many common infections like the cold and the flu.

One other common issue faced by seniors happens to that of weakening digestion with age. Kiwi fruit contains fibre that aids in digestion and the enzyme called actinidin, which helps break down proteins to speed up digestion. Eating a Kiwi fruit after a heavy meal is said to help greatly with digestion and the prevention of bloating.

Another worrying health issue among the ageing population is vision loss caused due to macular degeneration. The high levels of compounds known as zeaxanthin and lutein present in Kiwi fruit are said to help with this cause. They can help prevent macular degeneration and are usually known as the ‘eye Vitamins’. They work as antioxidants and help form Vitamin A, which is most helpful with vision. The vision is protected from cataracts and retina damages due to this.

Lack of sleep is another issue that seniors deal with. One study has proved that consuming a Kiwi fruit an hour before sleeping can help induce sleep. It is said that this is due to the presence of serotonin and antioxidants in the Kiwi fruit.

Alkaline foods help maintain the pH balance of the skin, which keeps it healthy. Kiwi fruits also help in this cause due to Vitamins E and C’s presence and prevent skin degradation. Consumption of Kiwi fruit also keeps the skin hydrated and healthy. The Kiwi fruit also has anti-inflammatory properties that help keep the skin and overall parts of the body healthy.

There are a few other benefits under study, and overall, it appears as if including the Kiwi fruit in the daily fruit platter may be of immense help. It can be eaten as is, is easy to purchase and store, and doesn’t spoil fast, and is also easy on your stomach.

Simple ways to use overripe fruits

Make The Peels Count and How!