Why You Should Include Mushrooms In Your Diet 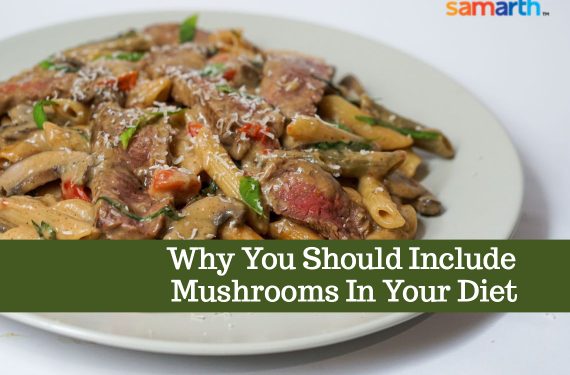 Mushrooms have always been treated a little differently in many Indian households. While there are vegetarians who consider it to be non-vegetarian, there are many vegetarians who use it as a meat substitute. Scientifically, mushrooms are classified as fungi, but in cuisines, they are clubbed under vegetarian food. There are around 14,000 types of mushrooms found across the world, of which only around 3000 are said to be edible. They are mostly wild, though, nowadays, the ones we find in our supermarkets and vegetable shops are mostly cultivated for commercial purposes.

There are indeed poisonous mushrooms and those that can cause other issues, like intoxicating you, etc. Hence, it is important only to buy the edible mushrooms sold in proper outlets. There are only around 20 varieties of mushrooms grown for commercial edible purposes, of which in India, we find around 8 of them. These are the commonly seen white Button mushrooms, the slightly brown Portobello mushrooms, the brown, wider and thinner Shitake mushrooms, the beautiful Oyster mushrooms, the longer Enoki mushrooms, the small and slender Shimeji mushrooms, and the cure looking Porcini mushrooms. Most households will be familiar with the white button mushrooms, which is widely available across India. Mushrooms are also called exotic foods, and in a way, they are superfoods as well.

Mushrooms have been eaten across the world from ancient times, and once upon a time in Egypt, they were considered royal food. The commoners were forbidden from eating it! Many ancient civilizations knew the medicinal properties and health benefits of mushrooms. There is evidence of mushroom consumption in Greece, Rome, China and Japan, and even in early European settlements. Today, it is cultivated in 60 countries worldwide, and China, the US, Netherlands, France, and Poland are said to be the top producers. For many reasons, the mushrooms were not so popular in India, though the scenario slowly changed.

When you consider the abundance of nutritional value in mushrooms, it should be included in your diet. They are high in proteins and low in fat and hence suggested as a good, healthy alternative for vegetarians. They are also low in Sodium and have zero cholesterol, and contain lots of fibre and minerals like Iron, Zinc, Potassium, Selenium, Copper, Calcium, Thiamin, and Manganese. They also contain Vitamins like D2, B12, B6, B1, B2, B5, C and more. They are made up of around 90% water.

Certain studies have proved the anticancer properties of mushrooms in fighting specific cancers like breast and stomach. A Japanese study even showed that people who consumed mushrooms regularly were at 17% lesser risk of getting prostate cancer. Also, it was found that lentinan, found in Shitake mushrooms, helped the survival of patients undergoing chemotherapy. It is said that this molecule not just enhances the immune system but also kills viruses and microbes and slows the growth of tumours. Certain mushrooms also contain a powerful antioxidant called ergothioneine that works as an anti-inflammatory agent. This property, too, helps in fighting cancers and tumours.

It is said regular mushroom consumption may act as protection against cognitive impairment and diseases like Alzheimer’s. The two antioxidants, ergothioneine and glutathione, are said to possess anti-ageing properties as well. A study based on ergothioneine concluded that seniors who ate more than 300 grams of cooked mushrooms a week were half as likely to have mild cognitive impairment.

Studies conducted on varieties like pink Oyster mushrooms and Shitake mushrooms have shown to help reduce cholesterol levels in the blood. This is because of powerful phytonutrients in mushrooms that prevent the plague build-up and help blood circulation.

Apart from these, there are many other medicinal properties of mushrooms because they are becoming more popular. They can be cooked in different ways and can be had as soups, salads, simple stir-fries, and toppings for pizzas, stuffing for burgers, etc. It has been adapted to many Indian dishes like grilled tandoors, curries, and Manchurian. It is said that the best way to eat mushrooms is by grilling or microwaving them, by using a little oil. Most other cooking processes like boiling make them lose their nutrients, though it is also important to cook them rather than eat them raw.

How do Seniors Manage Stress?