No Result
View All Result
Home In the Media 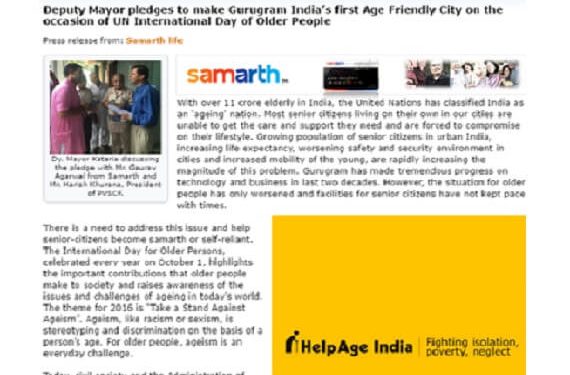 With over 11 crore elderly in India, the United Nations has classified India as an ‘ageing’ nation. Most senior citizens living on their own in our cities are unable to get the care and support they need and are forced to compromise on their lifestyle. Growing population of senior citizens in urban India, increasing life expectancy, worsening safety and security environment in cities and increased mobility of the young, are rapidly increasing the magnitude of this problem. Gurugram has made tremendous progress on technology and business in last two decades. However, the situation for older people has only worsened and facilities for senior citizens have not kept pace with times.

There is a need to address this issue and help senior-citizens become samarth or self-reliant. The International Day for Older Persons, celebrated every year on October 1, highlights the important contributions that older people make to society and raises awareness of the issues and challenges of ageing in today’s world. The theme for 2016 is “Take a Stand Against Ageism”. Ageism, like racism or sexism, is stereotyping and discrimination on the basis of a person’s age. For older people, ageism is an everyday challenge.

Today, civil society and the Administration of Gurugram came together on this important occasion to take an important step and pledged to make Gurugram an Age friendly city. The pledge was made by Mr. Parminder Kataria, the Deputy Mayor of Gurugram on behalf of the Administration of Gurgaon in the presence of Senior citizen representatives, activists and social workers which included Mr. Harish Khurana, President of Palam Vihar Senior Citizen Forum and Mr. Asheesh Gupta and Mr Gaurav Agarwal, Founders of Samarth Community of Senior Citizens which has members from DLF, Sushant Lok, South City and most sectors of Gurugram.
Speaking on the occasion Mr. Kataria said “I understand the needs of senior citizens and am fully committed to this initiative which is very much needed. We need to take Gurugram global in all respects”. Mr. Khurana and Mr. Agarwal lauded Mr. Kataria’s work in helping the elderly and expressed their belief that this will help put Gurugram among the leading Age friendly cities of the world. Asheesh Gupta of Samarth Community, which has senior citizen members in over 30 cities across India, explained that making the world Age Friendly is a WHO initiative and that they will assist the Gurugram administration to make this a reality.

Samarth is building a community of senior citizens across the country and providing family-quality care to address both the physical and emotional needs of the elderly. Through our various activities and outreach initiatives, we currently reach about 3 lakh senior citizens living in many Indian cities.