Devil’s Dung or Food of The Gods? Take Your Pick! 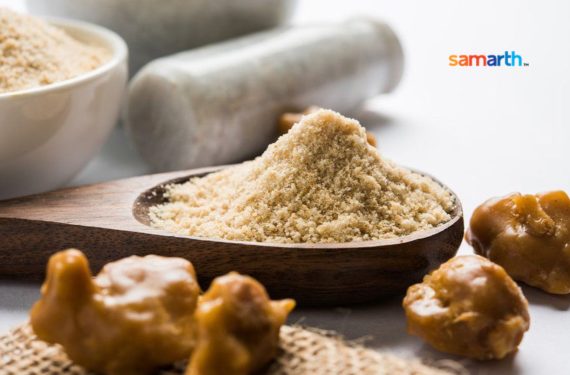 Indeed, this is the irony of a common seasoning ingredient of Indian cuisine – hing or asafoetida. It has been called many names including Devil’s Dung and Food of the Gods. For most Indians, hing is a spice, a must-have ingredient in our kitchen that adds an extra flavour to the tadka or the seasoning. It was supposedly, the Europeans who dubbed it the Devil’s Dung owing to its pungent smell.

However, this spice also has numerous health benefits, which ancient Indians were well aware of. Hence, it had its place in traditional and home remedies of many common ailments. Perhaps, that is why it is also called the food of the gods. The most prominent home remedy using hing is to help indigestion. A glass of hing-infused buttermilk or chaas can help digest a heavy meal and provide relief from gas and bloating. So, does this humble commonplace spice have any other benefits?

If it is so popular in Indian cuisine, it must be having Indian origin, one may think. However, strangely, that is not the case. Asafoetida, though grown in India today, is indigenous to Afghanistan and Iran. While some say that the Mughals brought it to India, few historians say hing finds a mention in ancient Buddhist texts and even the Mahabharata, dating back to around 300 BC. Some say it was the great emperor Alexander’s army crossing over the Hindu Kush mountains that brought it to India.

Well, whichever the case, it does look like the hing came, saw, and conquered! We cannot imagine many of our daily dishes without a pinch of hing adding that extra flavour to the tadka. It is a hard gum-like substance extracted from Ferula Assa-Foetida plants. It comes either in coarse resin-like small granules or as a yellow powder. It has a pungent smell owing to the sulphur compounds present in it. Due to its smell and texture, it is also called stinking gum by many.

Hing possesses antibacterial, antifungal, antiviral, and anti-inflammatory properties, because of which it is used in traditional medicines. Hing is a rich source of antioxidants that can protect us from many infections. The phenolic compounds such as tannins and flavonoids present in it provide these antioxidant properties. Most Indian households use hing as a remedy against indigestion, gas, bloating, etc. Scientific evidence also suggests that hing is a good digestive aid as it boosts the activity of digestive enzymes. This property also makes it a useful dietary supplement for people suffering from Irritable Bowel Syndrome (IBS).

Asafoetida is known to be a natural blood thinner and thus, can help manage blood pressure. It also has properties that can relax airway muscles, and this is said to help with diseases like asthma. Some home remedies for cough and cold include hing. Hing is also a natural antidote for insect bites and stings. Some animal studies found that asafoetida has anticancer benefits. More importantly, these studies have also shown that hing can protect against memory loss and nerve damage in the brain. Though it is supposed to have some side effects, since it is used in minor quantities and mostly for seasoning, it is unlikely that people may be affected by these.

How to use it?

Hing, in its powder form, can be added to tadka using hot oil and can be mixed with other spices too. It can also be added while preparing savouries while mixing the dough or in the filling mixture as in a kachori, etc. If you are using the lumps, it is better to crush them and mix with water and use it in the liquified form. In conclusion, whatever the name it is called by, hing is here to stay, and the next time you add it to the tadka pan, remember it comes loaded with history and surprising health benefits.

Adding Zing To Your 60s!

5 Reasons to Include Poha in Your Diet

Adding Zing To Your 60s!