5 Reasons to Include Radish in Your Diet 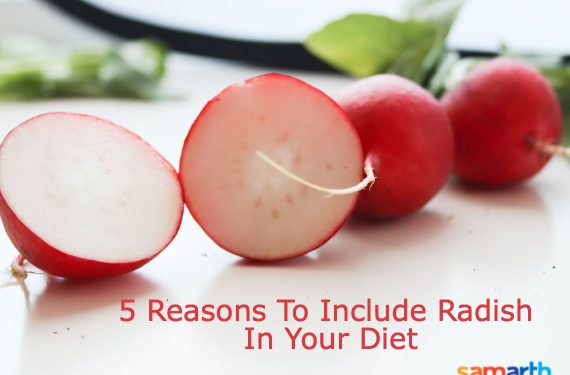 Radish is a winter vegetable, even though it is available across India in other seasons too. Though the white coloured one is more commonly seen in India, there is the pink/purple variety as well. This vegetable can be eaten raw and is used in salads, and can also be cooked in various ways. While in the South, the mullangi sambar is popular, in the North, it is the mooli parantha that rules the roost. Besides, it can be used in a variety of fo gravies as well. Even though it is a root vegetable, the leaves of this vegetable are also used to make subji.

Radish provides a lot of health benefits as it contains Vitamins C and B-6, and a lot of minerals, namely Magnesium, Copper, Calcium and Iron. It is known to be a powerhouse of Pottasium and fibre, both of which are highly beneficial for health. It also contains a host of antioxidants such as antioxidants Vanillic acid, Catechin, Pyrogallol and other phenolic compounds.

Eating radishes can help prevent diabetes, which is a major lifestyle disease in India, known to be the diabetes capital of the world. Two chemical compounds contained in radish, Glucosinolate and Isothiocyanate can help regulate the blood sugar levels in the body. The Adiponectin hormone in our body protects against insulin resistance. Radish consumption enhances the production of this hormone in the body. The antioxidant Coenzyme Q10 present in radish helps in diabetes prevention as well.

Radish consumption is known to reduce the risk of cardiovascular diseases; it is the amount of antioxidants and minerals like Calcium and Potassium in radish that helps in this. Potassium helps lower the blood pressure, and radish is said to have a cooling effect on blood as per Ayurveda. Additionally, radish is also a good source of natural nitrates and anthocyanins that makes it a heart-friendly vegetable. Also, components in radish play a vital role in collagen production that boosts blood vessels and prevents chances of atherosclerosis, which usually affects the heart, even though the artery issue may crop up anywhere in the body.

Radish contains a lot of fibre, which adds bulk to the stool and improves digestion and bowel movement. It is also good for the liver and gall bladder, and improves bile production in the body, thus improving the digestion. Two compounds in radish, Indole-3-carbinol and 4-methylthio-3-butenyl-isothiocyanate, helps in detoxifying the liver and healing it from any damage that may have occurred as well. Components in radish can help fix many common digestive disorders like acidity, gas, and nausea.

The high amount of Vitamin C present in radish makes it a good immunity builder. Radish consumption can help protect against cold and cough. It protects against the formation of free radicals that cause a lot of issues, especially through cell damage and inflammation.

Vitamin C, Zinc, and Phosphorus present in radish help keep the skin healthy. Common skin issues like acne, dryness, rashes, etc., can be brought down through radish consumption. Radish paste is also applied to the scalp to remove dandruff and prevent hair loss by strengthening the roots.

From salads to a sandwich, radish can be used as a raw vegetable and had a crunchy texture, even though many people do not like the pungent smell. It is used to make chutneys, gravies, and dry subjis, apart from using as a filling for the paranthas. Radish soup and juice are also very good for health. You could also mix it up with a few other vegetables in curd and serve as raitha. It can be combined with any lentil for preparing gravy. Even a simple stir fry with some basic spices makes it very palatable.

Online Food Apps to the Rescue

How to Freeze Fruits and Vegetables