5 Signs of Hearing Loss You Should Look Out For

..plus what medical conditions lead to hearing loss! 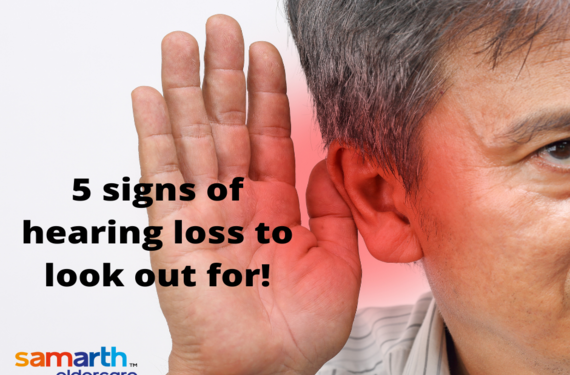 Presbycusis is the medical term given to hearing loss caused due to old age. Studies have said that one in five peopled over the age of 60 are afflicted with some sort of hearing problem. Interestingly our own community survey revealed that up to 51% of seniors experience some degree of hearing loss. Seniors suffering from presbycusis often are not able to recognize that they are because of the gradual nature of the condition. Mentioned below are 5 signs of hearing loss you should not ignore, and what are some medical conditions which may lead to hearing as well.

With age, it can be difficult to distinguish between certain sounds, especially high pitched sounds like “sh” or “th”. Dr. Sujana Chandrasekhar, M.D, based out of New York says that ““When you can hear vowels but not consonants, it sounds like people aren’t speaking clearly, so it’s easy to blame them,”

It is quite common to pick up cues from the other person while conversing to help us navigate through a conversation. Facial expressions, lip-reading, context- all of them help in following conversations, especially when you are hard of hearing, and this may be done subconsciously as well. However, with widespread mask usage due to the pandemic, these helping cues are taken away and you may find it harder to follow a conversation compared to before.

Again, something that can be done innocuously, but it might be a good idea to check with your doctor if people are constantly telling you to turn down the volume of the tv. Alternatively when watching television with the family, you may find yourself straining your ears in order to follow the television program.

When you’re talking to someone face to face, the sound is usually going in both ears, but talking on the phone generally means that sound is only going in one ear. That makes it challenging to properly make out what the other person is saying, especially if you’re holding the phone to the ear which has more hearing loss.

The phenomena when certain sounds seem to be more louder than normal, and makes you easily startled is called ‘recruitment’. This happens when a person does not lose all the hair cells in their ears at the same time. Therefore, when a sound is louder than normal, it makes the remaining healthy cells to react more convincingly than they normally would.

Medical Conditions which May Lead to Hearing Loss

There are certain other medical conditions which seem to have a link with hearing loss as well. For example, a study based in the USA found that hearing loss is twice as common in people with diabetes compared to people who don’t have diabetes.

High blood pressure, or hypertension, can also cause damage to blood vessels in the body, which include those vessels carrying blood to the ears. Reports have shown that people suffering from high blood pressure have a higher rate of hearing loss.

Osteoporosis is also one condition that can cause hearing due to the softening of the bones in the ear, although the chances of this happening are rare.

Ten Signs You Should See an Eye Doctor

Ten Signs You Should See an Eye Doctor