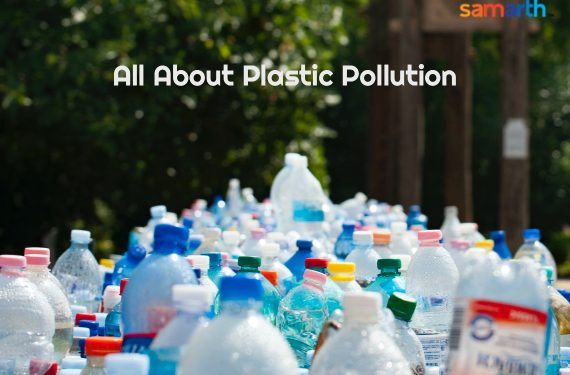 We have heard about air pollution, noise pollution, water pollution, soil pollution and so on. But, rarely have we heard the word plastic pollution being used, even though, in a way, all of us continue to pollute the world with our plastic usage. Plastic pollution refers to the pollution in the environment around us, due to the disposal of many plastic-based things like water bottles, milk packs, soda cans, garbage disposal bags, carry bags and so on. Most of these especially are single-use plastics, which we throw away after just one use. This gets accumulated over a period of time and causes plastic pollution.

Unlike many other options that are easily bio-degradable, plastic takes decades or even a hundred or thousand years to decompose and hence it is a big concern. Even in the landfills, they would pollute the soil and water around. And if you burn it, it would pollute the air around. So, one way or the other, it ends up harming the environment, especially when we are already dealing with many other pollution issues.

Why we should worry about it?

Recently there was a news item wherein a cow had to be operated and 52 kg plastic was pulled out of its belly! The cow was clearly was uncomfortable, kept kicking its stomach, was not giving milk, even to its one-month calf, and was also constipated. This happened at Tamil Nadu Veterinary and Animal Sciences University (TANUVAS) in Vepery and the cow is being rehabilitated. So, clearly the plastic waste that we dispose of, is a big threat to the bovines who end up eating and not every cow may be lucky enough to get diagnosed and operated and in fact, why should it come to that? In fact, animals have also been known to suffocate or choke, on the plastics when they try to eat it.

Coming to the ocean and marine life, plastic in the ocean (which is the maximum waste found in the ocean), is a big issue that can upset the ecological balance. It poisons the small organisms like planktons, which the bigger marine animals eat and then get poisoned too. Then these animals find their way, onto the plate of the people who eat seafood, and thus it does affect humans too. And not just that, in the long run, this can also affect the fishing communities and the economy related to this industry. Even other land water sources where plastics are dumped get polluted very badly. Burning is obviously not a solution, and creating landfills will only take up more land; the land is, after all, a very pricey commodity nowadays. Also, cleaning up the oceans and landfills also is huge time as well as money consuming effort. So, overall, the plastic usage and dumping are causing more harm than good.

What can we do?

Is there is a workable solution to this problem, and what can we as individual citizens do, to make this better? For one, we can try to avoid using plastic wherever possible. So, we should use reusable water bottles and avoid single-use plastic water bottles. We should also carry our own reusable carry bags and avoid asking for single-use plastic carry bags. Many restaurants are now asking you to bring your own containers when you order takeaways so that plastic containers can be avoided.

Innovative measures like bamboo straws instead of plastics ones, or serving juice in the fruit shells instead of plastic cups, and using small matkas for tea/coffee and ice creams are also on the rise. Use refill packs for most products like detergents, liquid soaps, health drinks like Bournvita or Complan, etc., wherever possible. Even easily bio-degradable plates made out of leaves and other plant-based materials are available. It is tough to eliminate plastic from our lives, but slowly, and steadily, we can definitely bring down the usage and avoid waste, and thus the pollution, by a lot.

The Prime Minister of our country had urged people to avoid single-use plastics, and this is something just like the Swacch Bharat campaign, that needs to take off. All of us should in our small way, be an ambassador for this and make sure that there is awareness created about it. The complete environment around us, the air, water, soil, and the plant and animal life may be dependent on these small measures we take.

Is There More To That Tea Cuppa?

Foods That Keep Diabetes at Bay

Foods That Keep Diabetes at Bay