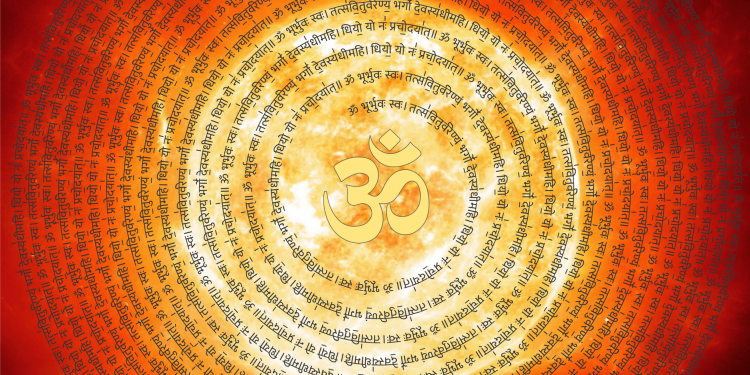 HINDUTVA, the oldest religion of the world, has given a valuable Hymn to the world in the form of GAYATRI MANTRA. This is the only mantra, where every single word is packed with power. The Gayatri mantra originated from the Rig Veda, the ancient Hindu scripture.   A great sage, Vishwamitra, son of King Gida, was given the Gayatri mantra by the Supreme Being himself, as a reward for his deep penance and meditation. This, ultimately, has become a most precious gift to the entire human being.

It has been now, scientifically also, proved that the enchanting of Gayatri Mantra produces 110,000 sound waves per second. This strength as has been tested by one American Scientist  Dr. Howardes Stein grill, who collected various mantras, chanting and invocations of different religions, from all over the world,  and tested their strength in his Physiology lab. The power of GAYATRI MANTRA was found to be the highest, making it the most potent Hymn of the world. The combination of sound waves at this particular frequency of the Mantra is claimed to capable of developing specific spiritual potentialities.

The Hamburg University, Germany, initiated research into the efficacy of the Gayatri  Mantra, both on the mental  & physical plane of CREATION…., the Gayatri  Mantra was broadcasted daily for 15 minutes over Radio Paramaribo, Surinam. South America for about two years and in Amsterdam, Holland for the last about six months. The results confirm the findings that this mantra has special spiritual powers.

The chanting of Gayatri Mantra provides Material and Physical benefits and also produces a subtle spiritual benefit.  It has been specifically found that chanting of Gayatri mantra elevates a person’s mind and soul to a higher level.
The vibrations, created by the chanting of this mantra directly works on the three chakras of the body- namely the third eye, throat, and crown chakras. These three chakras help in improving concentration as these are directly related to the brain & penial gland, eyes, the pituitary glands, and thyroid glands.  As the brain is stimulated, it keeps the person calm and more focused, and thus relief from stress making him more resilient. It, therefore, acts as a common treatment for Depression and epilepsy. The vibrations created by the chanting of The Mantra, stimulate the penial gland, which helps in release Endorphins and other relaxing hormones in the body that helps keep depression at bay.

Chanting of Gayatri Mantra, significantly slow down a person’s breathing, which synchronizes and regularize the heart beats, helping the chanter in staying healthy by keeping his heart healthy.

Gayatri mantra calms the mind: the chanting starts from OUM. The enunciation of this sound creates vibrations through lips, tongue, palate, back of the throat and skull which results in releasing of the relaxing hormones, causing extreme calmness to the mind.

The enunciation of the Gayatri mantra creates a resonance in and around the head. These vibrations stimuli the Hypothalamus making it function more efficiently. This gland is responsible for the release of Happy Hormones and thus becomes the key player in the mind-body connection – the happier one is, the stronger is the immunity.

All the above impacts are medically proved as a result of a study conducted and published in the British Medical Journal (a most prestigious medical journal).
Since Chanting of Gayatri Mantra, regulates breathing, it is also useful in the control of treatment of Asthma as well.

Paramhansa Yogananda, in his famous book “Autobiography of a Yogi” also emphasizes the importance of the word, by mentioning that:

“The infinite potencies of sound derived from the creative word, AUM, the cosmic vibrating power behind all atomic energies. Any word spoken with clear realization and deep concentration has a materializing value. Loud or silent repetition of inspiring words has been found effective in systems of psychotherapy: the secret lies in the stepping-up of the mind’s vibrating rates.”

The Gayatri mantra is the SAVITRI MANTRA.   Rig Veda, Yajur Veda, and Atharva Veda contain hundreds of Gayatri mantras in themselves since they all are devoted to AGNI, meaning  Surya, The lifeline of that period.  However in this specific mantra t, the God “SAVITR” is invoked, hence is called as Savitri mantra. With time, this Mantra became famous as GAYATRI MANTRA.

Gayatri mantra is ideally chanted three times a day, viz early morning, mid-afternoon and in the evening,( known as Three Sandhyays) As this mantra is directly associated with the Sun, the timings of chanting are directly related to the movement of Sun.  The most important aspect in the chanting of the Gayatri Mantra is in its pronunciation because this mantra is the “Beej Mantra” in Sanskrit,  and each word carries a very deep and powerful meaning into itself. The full impact, therefore, is achieved only when the mantra is enchanted clearly and correctly along with the complete knowledge and the meaning of each word.

The original Gayatri Mantra is

the overall meaning of the mantra is:

We meditate on that most adored Supreme Lord, the creator, whose effulgence (divine light) illumines all realms (physical, mental & spiritual). May this divine light illuminate our intellect? The detailed meaning of each word is given below:

OUM; the primeval sound; It is the supreme name of the GOD, is also known as Pranav mantra. It is also known as primary or Parama (Beej Mantra) because it contains the seeds of all mantras within itself.

BHUR: the physical body/ physical realm; It implies the existence of God it is eternal and unchanging

SAVITUR: The Sun, creator (source of all life):

YO: May this light;

The obvious and straightforward meaning of the mantra is that the divine and the holy ray of light that permeates all that exists, the significant and adorable sun as I meditate on your supreme and sovereign radiation, may you illuminate and brighten my intellect.

Regular chanting of this mantra provides the following benefits:-

Gives a glow to skin

Brings prosperity and development in the day to day life.

Every mantra has a combination of some beej aksharas (root words) in them, rendering the mantra sacred and powerful when chanted. They release a wave of energy into the body of the chanter. Gayatri mantra has all the 24 syllables, making it the most powerful mantra in the universe. It is the only known mantra that has all 24 of its constituent syllables as beej aksharas, the chanting of which releases a tremendous wave of energy and shields the devotee from all bad external influences.

This Just Shows That…Age Is NO Bar for Learning!

How to Report Online Frauds

This Just Shows That...Age Is NO Bar for Learning!