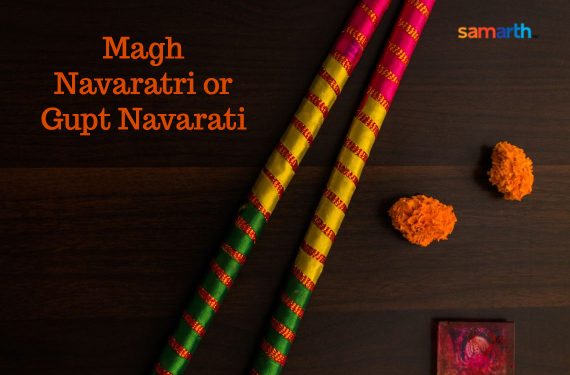 Not known to many of us, there are four Navaratris in a Hindu calendar, though we all know about one mostly. These are the Chaitra Navaratri, Ashadh Navaratri, the Shardiya Navaratri and the Magh Navaratri. Among these, the whole of India celebrates the one that comes up just before Diwali as Dusshera and Durga Puja. There is another Navaratri is coming up in February which most of North India celebrates. This is the Magh Navaratri, also called Gupt Navarati. This year, these nine days of celebrations start from 2nd February till 10th February 2022. Different forms of Goddess Shakti is worshipped during this period, especially by women.

People also fast (vrat) during this holy time and people consume vegetarian or satwik bhojan only. There is also a belief that if you have any wish to be fulfilled, it should be kept secret before worshipping the goddess. The more secret the wish is kept the more chances are there of attaining the wish. During this time, Vasant Panchami and Rath sapthami is celebrated as well.

People who are fasting eat fruits and drink milk or fruit juices or lassi or chaas, etc. Wheat flour is avoided and hence, foods made from kuttu ke atta, singhara ka atta or rajgira ka atta are eaten instead. Some other common foods are potatoes, curd, peanuts, sabudana, paneer, buttermilk, coconut water, etc. A variety of recipes with these ingredients are available to try out for the nine days.

Instead of rice, people eat barnyard millet called as Vrat ke chawal or samak ke chawal. Sweet potatoes, arbi, pumpkin, suran or yam, bottle gourd, etc are some of the other popular veggies of this time. However, there is no restriction on eating any vegetable as such, though onion and garlic are avoided.  Rock salt or Sendha namak is used instead of regular salt, and most spices like cumin, cinnamon, cloves, pepper, etc are allowed to be consumed. Haldi is avoided and so are mustard and sesame oil. Usually, fried food is avoided these days. Dry fruits are also a good option to snack in between.

There is no restriction on seniors fasting provided they ensure that proper food is taken on time. The most important thing is to keep oneself hydrated with constant liquids. If you are eating less, then have more small meals across the day to keep the energy levels up. You may also avoid exercising these few days if you are feeling less energetic so as not to burn up the energy.

It is a good practice for diabetic patients to monitor their blood glucose levels at least twice a day during this time. Alongside, blood pressure should also be monitored to ensure that no vital parameters are fluctuating. Sodium imbalances can happen due to less consumption of salt; hence, care should be taken.

It is suggested that people have a healthy breakfast during this period that includes proteins, fibre, and good carbohydrates. Diabetics should restrict the consumption of potatoes as well. It is best not to skip meals and eat lightly at least. If there are any symptoms like nausea, vomiting, or diarrhoea, then a doctor should be consulted immediately. Even lingering headaches and dizziness could indicate sugar or sodium issues that would need medical attention. Hence, such symptoms should not be ignored.

Try out this simple Vrat ki Kadhi to go with your lunch. You need very few ingredients for this.

Recipes to Enjoy The Festive Weekend

The Significance of Holi Colours