No Result
View All Result
Home In the Media

“I wish I was there”: lessons on caring for parents remotely 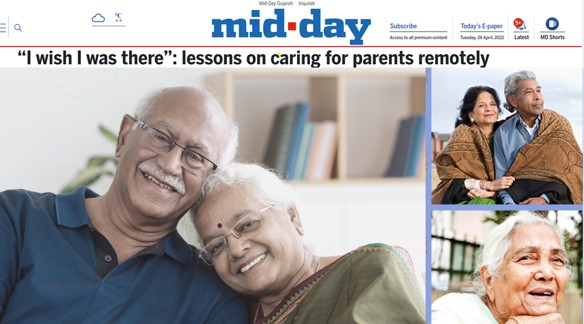 Years of working with thousands of elderly in more than 70 cities in India and their adult children in more than 30 countries, assisting them to support their parents, has given us numerous insights.

I wish I was there – was a  constant refrain for all four of us co-founders as we pursued our life and careers, while looking for ways to support our parents,  that solving for it became an obsession for us.

About 10 years ago my father had a stroke in Dehradun, where he lived after retirement. I was desperate to be by his side, and all the time while he was being rushed to the hospital, vital decision were being taken, and my mother was alone, the thought running through my mind was ‘ I wish I was there’.

My mother had a fall a few months ago. I learnt about it from Ritu, the Samarth care counsellor who is an integral part of our family care group. I called Mom and asked her why she did not tell me and she said very matter-of-fact-ly – ‘but you could not have done anything’. And again I wished I was there.

These are just a few incidents, but between Emergency, health care, safety and chores like renewing licenses and paying bills, almost every week there is something that makes you wish that you were there to assist them. When we started Samarth almost six years ago, our idea was to build on our personal experiences and create a service which we would want for our own parents and ourselves.

We conducted a major research to better understand the needs of both children and parents we aimed to serve. The children’s responses focussed on the physical needs of the parent, which did not surprise us. However, the response that we got from the elderly was unexpected. Their needs were more emotional and social.

First, they want people to talk to. To relieve loneliness and dealing with isolation… quite expected. The second thing we learned surprised us. Seniors wanted to be able to move about and visit places. We had not realized how important mobility, going out to meet people was for them. The third thing we learned was how strongly they valued the feeling of being needed, to serve a purpose.

We realized that we need to cater to both physical and social needs treating them as equally important.  We also need to be mindful of ensuring that the dignity of elderly is not compromised. Walking that tightrope between dependence and care is essential.

A critical ingredient in caring for elderly is trust.  We saw that elderly are wary of using many services because they don’t fully trust them. Nowadays, one can get a leak in the bathroom repaired by a few clicks on our phones, we can get groceries and other things delivered to our homes in less than 10 minutes via an app. But many seniors hesitate in using these services because they don’t know the people behind them, and don’t trust them. Who would they really trust, we asked. There was one obvious answer, and that  was “their children”. So that became our standard. If we had to earn their trust, we had to think and act in the same way that we do with our parents. Practically, that meant taking ownership of things, both physical and social, and that is what our care counsellors and teams do.

An important insight from our work was how the elderly prefer to interact, and the role that technology plays. Many people of that age do not trust technology. The learning for us was to blend touch and tech intelligently. We use a lot of tech, but we do not push it on elderly. With the children, there is a lot of interaction via technology but with parents, we need to bring the human touch to make sure there is someone they can meet, see and talk to.

Services that are offered without a human touch tend to be transactional in nature. What creates value is relationships, and we strive to cultivate these relationships where we are ultimately thought of as a part of the family. Our recruitment, training, and processes are all built on this principle, of acting like the son and daughter to the parent.

Many of these learnings ,which we use for setting the gold standard in eldercare in India, can also be used by children who are looking after their parents themselves from a distance, wishing that they were there .

As published in Mid-day

Beyond Apples to Keep the Doctor Away – Part 1

How to Report Online Frauds

Beyond Apples to Keep the Doctor Away - Part 1