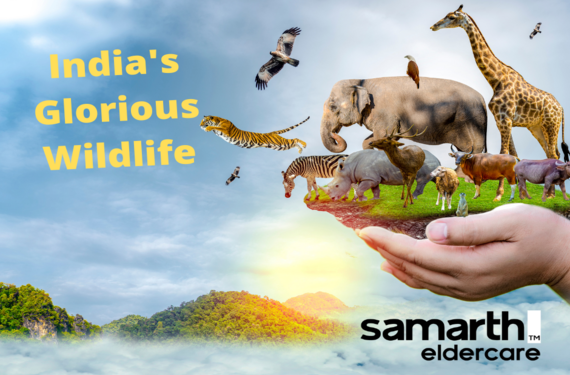 Even if you are not a wildlife enthusiast, a winter wildlife getaway may still be something that can bring cheers. And you do not have to look to the African continent when we have so much on offer in India. Winter is the best time to experience wildlife safaris at their best. When the temperatures dip, the various animals come out of their deep hiding places into full view. The winter season also sees Indian forests and lakes welcoming migratory birds from yonder lands. The winter season-October to March offers a natural, visual treat to those who venture out. It is a great way to connect with flora and fauna. If you have grandkids to tag along, it becomes an educational tour. Also, if you have taken to photography or want to check out your phone camera, this is the best way to do so. So, what are your options?

India’s oldest and one of the best national parks, famous for its Bengal tigers, elephants, and a variety of other animals such as deer, langurs, peacocks, sloth bears, and more, is a must-visit wildlife destination for seniors in winter. You can spot as many as 586 bird varieties here during the winter, a veritable treat for bird watchers. Temperatures dip very low here from January to February, and you should prepare accordingly.

The park is accessible by road from New Delhi, its nearest international airport, around 260 km away. Alternatively, you could check the Dehradun or Pantnagar Airports based on your starting point. By rail, the nearest railway station is Ramnagar, situated around 12 km from the park and connected to the railway from Delhi. Ranikhet express is a direct train to this place from Delhi, running back and forth at convenient times. They conduct safaris twice a day between scheduled timings.

This national park is a lesser-known one compared to others. However, it has the distinction of being the winner of the best maintained national park excellence award winner in 2007. Here you can find more than 1200 plant species and 200 plus bird species. Some birds found here include blossom-headed parakeets, honey buzzards, king vultures, and bar-headed geese. The population of Bengal tigers in this park is slightly less, even though you can spot them on a safari. You can also spot a wolf, deer, sloth bear, and many more animals in the habitat here. This national park conducts safaris twice a day and also a night safari in certain areas.

The nearest airport to Panna is Khajuraho Airport, located 40kms away, connected by flights from Delhi, Mumbai, Chennai, etc. Khajuraho also is its nearest railway station and is well-connected to most major cities. You can also check Satna and Jhansi if that is convenient. It is well connected to all major cities by road via Bhopal, Gwalior, and Jhansi.

This national park was once the private Royal hunting grounds for the Maharajahs of Mysore and is known as the gem of the south. The various fauna you will find here in their natural habitat are elephants, sambar, leopard, langur, sloth bear, spotted deer, gaur, wild dogs, Malabar squirrel, jackal, etc. It is famous for its Bengal tiger safari. It also has 350 avifauna species, thanks to the rainforest nestled in the Western ghats. Interestingly, this park borders Kerala and Tamil Nadu and is easily accessible from all three states.

The nearest international airport is Bangalore, from where you can travel by road to Bandipur via Mysore. Alternatively, you could travel to Mysore by train and then take a cab to Bandipur. You can also explore the connecting flights to Mysore airport. The closest railway stations are Mysore, Chamrajanagar, and Nanjangud, which you can check for accessibility from your city. By road, it is well-connected to all states. However, the road through the Bandipur tiger reserve connecting to other states is closed from 9 p.m. to 6 a.m. to protect the animals. Safaris are conducted twice daily for the convenience of tourists.

For those looking at options closer to their places, the other options to check out are:

Check the climate and dress accordingly. Dress comfortably, wear shoes, carry water, and follow the guidelines set by the park administration, to not disturb or feed the animals.