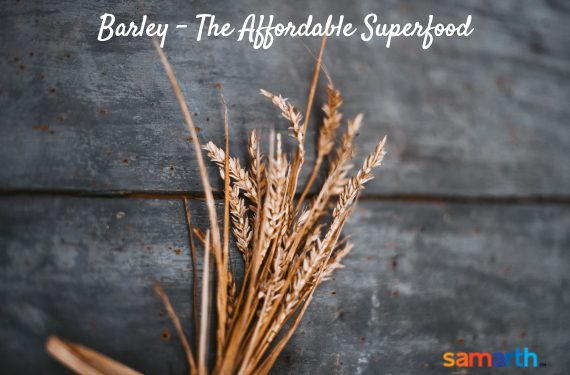 Foods that are nutritionally dense and packed with antioxidants that provide many health benefits are dubbed superfoods in the marketing terminology. Seafood rich in Omega 3 fatty acids like anchovies and sardines, fruits like pomegranate, berries, grapes, apples, vegetables like broccoli, greens and microgreens, nuts like almonds and pistachios, seeds such as flax and chia seeds, all fall into this category. Whole grains also come in this category, and in India, we typically have a history of using a lot of whole grains.

Chakki ka atta or locally ground flours are common in most parts of India. These retain a lot of the nutrients and explain the higher life expectancy rates and good health of many among the aged population. In the new-age urban population, though, superfoods are a fad. Many foods, dubbed as superfoods, is sold at a high price in the supermarkets. However, the matter is that you don’t have to go out of your way to bring these into your diets. For example, Barley, one of the commonly used whole grains in India, is also a superfood. Perhaps, we didn’t realize it yet; but, the humble barley has many health benefits that make it a superfood and is quite affordable. It is the unsung hero among all other grains such as wheat, oats, rice, etc.

An ancient grain that has been in use in many civilizations across the world, Barley, can be used in many different ways. It is used for making soups, broths, stews, porridge, in many baking recipes, and even salad and beer! In India, the many dishes we make are khichdi, pulao, dosa, and even kheer. It is also easy to cook, loaded with nutrients and easy on digestion. That makes it a superfood that should be included in the young and the old diet.

It contains soluble fibre, has a low glycemic index making it ideal for people with diabetes, and is high in Potassium and low in Sodium and fat. It is rich in the B-group Vitamins like Niacin, Thiamin, Riboflavin, Vitamin B6, Folate and Pantothenic acid. It also has Vitamin E, Iron, Molybdenum, Magnesium, Zinc, Phosphorus and Selenium. It also contains small amounts of Copper, Chromium, Manganese, and Calcium.

It also contains phytochemicals like Lignans, Phenolic acids, Phytic acid, Plant Sterols and Saponins, which work as antioxidants. Barley sprouts are said to have increased amounts of nutrients. And it is available in the market in many forms, grains, flakes, grits, and flour. Pearl Barley is also common, though, it loses the bran and is said to be less nutritious.

Barley helps you stay full and thus you can reduce snacking if you include Barley in your diet. For this reason, it is also dubbed as a weight-loss food for those aspiring to do so. It makes you feel full due to its high fibre content, especially the beta-glucan, which tends to form a gel-like substance in the gut. This slows down the digestion and keeps you feeling you from feeling hungry for a long time.

For this reason, Barley is also said to improve your gut health; it also contains a lot of insoluble fibre that adds bulk to the stool, making it easy to pass. This also helps reduce constipation, another common complaint among aged people. Scientific studies suggest that this helps reduce gut disorders like IBS, ulcerative colitis and Crohn’s disease, etc.

While the low glycemic index is a boon for diabetics, the Magnesium and the soluble fibre in Barley may also help prevent diabetes. These help lower the blood sugar levels and improve the body’s insulin secretion. As mentioned above, the slow digestion also slows down the sugar absorption into the blood. Many studies have recorded that barley consumption helped with insulin sensitivity.

Cholesterol and heart disease go hand-in-hand, and seniors are urged to adopt foods that help keep the cholesterol level low. The beta-glucans in Barley is said to help with this. Research done on this matter has proved that Barley consumption reduces low cholesterol levels in the body. It helps reduce blood pressure and helps keep your heart healthy. Overall, it is suggested that Barley helps keep cardiovascular diseases at bay.

Prevention of Kidney and Gall Stones

One of the most common uses of Barley is to prevent kidney and gall stones or reduce and negate its impact. The insoluble fibre in Barley helps prevent stones, and regular consumption was also seen to make the gallbladder healthier. Barley water is a commonly suggested home remedy in India to bring down Kidney and gall stone issues.

We are aware that foods rich in antioxidants help prevent cancer, and hence, Barley works as an anti-cancer food. It may especially help prevent colon cancer due to high fibre content that slows down digestion. The soluble fibre in the Barley is also said to help remove carcinogens from the gut.

The Right Way to Use a Pill Organizer

5 Superfoods to Boost Your Brain Health