Cardamom – Beyond a Flavourful Spice 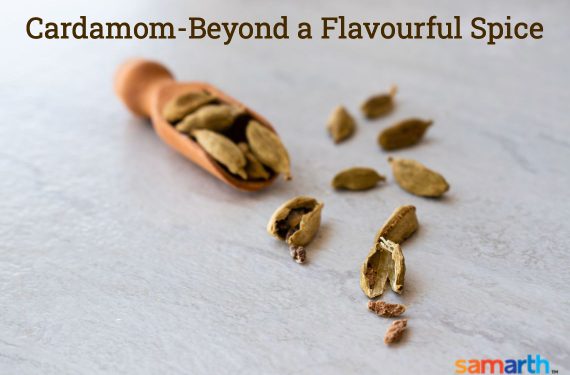 Found in almost all Indian homes, cardamom is the most flavourful spice that makes many dishes more appealing and delectable. Typically, you get its aroma across the whole house when it is used in the kitchen. People in the house get a heads up that something nice is cooking. It is a much-coveted ingredient in most Indian sweet dishes. It is also used in baking cookies, pies and cakes; certain savoury dishes also contain cardamom.

Though it originated in India, it is now available across the world and used in many cuisines. In India, it is mostly grown in South India and Guatemala, which became the largest producer and exporter of this spice. The plant belongs to the ginger family, and cardamom is the seeds obtained from it. It is costly, but then, its flavour is so strong that you need to use only a pinch of it, and it goes a long way.

For many Indians, elaichi chai is a favourite that can instantly lift their mood. It is said that this is an ancient spice and even Egyptians and Greeks used it. It was one of the main spices that were traded with the Arabs, Portuguese, and the British from India’s erstwhile Malabar region during the princely days. The two available varieties are green cardamom and black cardamom. The green one is used more commonly, while the black one is slightly larger and available in the Himalayan region.

Is cardamom just a flavourful spice to cook for the aroma, or does it have any health benefits beyond that? Surprisingly, this little spice packs quite a punch that we are unaware of. That pinch of cardamom that we use may well also give us little health benefits against many common diseases.

Antioxidants are our body’s major weapon against cancer, and their presence in cardamom is helpful in this cause. Studies in rats have shown that cardamom compounds may help fight cancer, specifically tumour growth. Some other studies have shown cardamom consumption can help prevent skin and oral cancer as well. One other reason why it is helpful in cancer prevention may be its anti-inflammatory properties. Compounds found in cardamom fight inflammation, thus preventing cell damage. In the long term, it also protects from many other chronic diseases, as inflammation is the root cause of all many diseases.

Chewing on cardamom is a common Indian remedy to prevent or overcome nausea while travelling. It is understood that it helps with digestion and relieves abdominal discomfort, and is used as a home remedy. It may even heal stomach ulcers or prevent them as well. It has been used as a remedy against bad breath since ancient times. This is why it is used as an ingredient in chewing gums for freshening one’s breath. They also help prevent the growth of bad oral bacteria. These anti-bacterial properties may be helpful in our overall health also.

Some interesting studies have also shown that cardamom may help with weight loss, reducing anxiety, and help prevent liver diseases. It is also used as a home remedy against cough and cold. A cardamom tea infused with honey and lemon is beneficial in this endeavour. Cardamom oil can help people with insomnia by reducing anxiety. Cardamom even helps with blood circulation and helps in flushing toxins out of the body. The Chinese even claim that cardamom consumption can help with longevity. Whatever the reason, it appears that this little spice seems to be holding a lot of health secrets within its pods, which we need to explore.