Cloves – Why It’s More than A Tooth Ache Remedy 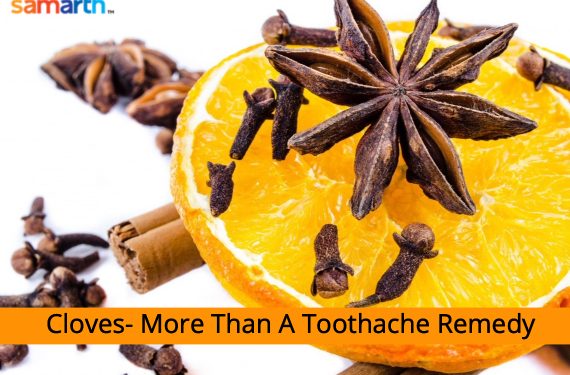 Perhaps the mention of cloves reminds us of our granny’s toothache remedy, as that is what this spice is known for. This spice is not something new in Indian homes as it is very much a part of Indian cuisine. Recently, when the Ayush ministry released some immunity-boosting measures due to the COVID-19 pandemic, perhaps many also noticed that cloves found a mention. It is one ingredient being used in the kaada, the immunity-boosting concoction that is recommended. It can also be used in teas and is also part of many flavourful Indian dishes.

Cloves are the flower buds obtained from the clove tree and is used in Western cuisine as well. It is used in baking cakes and cookies, and for seasoning, as well as in soups and pot roasts. In India, it is a part of the many traditional Indian home remedies, the toothache being just one of them. What is not known to many is its immense health benefits.

It is highly nutritious and contains fibre, Vitamins, and minerals, all of which are essential to maintain good health. It contains Manganese, Calcium and Magnesium, apart from Vitamins K, C and E. The Manganese helps maintain brain functions and strengthen bones. They are low on calories, and very high in Manganese, making it a good diet supplement for most people.

The other reason why cloves are good for health is that they also contain a high amount of antioxidants, which as we know are anticancer. They reduce oxidative stress and prevent damage from free radicals, because of the presence of a compound called Eugenol. There are studies that have proved that cloves stop tumour growth and also cause the death of cancer cells in the body. Therefore, cloves used as an ingredient in the regular diet in moderate quantity can help boost health.

Note: Using cloves or its oil in high amounts can be toxic as well, and hence caution needs to be exercised, and it should only be used in moderate quantities.

Cloves have antibacterial properties, and it can kill bacteria like E. Coli and Salmonella, that cause food poisoning. This is also the reason why cloves are used for maintaining oral health. It prevents gum disease and also plaque and bad breath. Clove oil can act as an analgesic and an anti-inflammatory agent, which is why it is a well-known dental pain reliever.

Some studies are suggesting that cloves can help regulate blood sugar, while a few others are studying its health benefits on the liver. The Eugenol is supposed even to reverse cirrhosis, and prevent further liver damage. Some studies in animals have also shown cloves to help prevent stomach ulcers. It helps purify the blood by reducing toxicity and stimulating while blood cells. This is why it is suggested as an immunity booster food.

Cloves also boost your metabolism naturally and thus work as a good digestion aid. It helps your skin because it fights the free radicals and oxidative stress formation in the body. Clove oil is also used as a traditional medicine for fighting respiratory diseases, especially in the winter.

Cloves can be used directly in dishes like Biriyani, Pulao, and many other rice recipes, and even gravies, by just frying one or two of them along with the other spices used. You may also powder and keep cloves, and sprinkle them on dishes for a mild flavour, or use the powder along with your other masala powder. Cloves can be even used in many desserts as well. It adds a special flavour to Kheer and Kesari Bhath, laddoos, and many other dishes.

Cloves are a common ingredient in baking and make cookies, cakes, and pies, more flavourful. The clove powder can be sprinkled on top of most dishes, and even salads, if you like the flavour. Use it moderately only, as the flavour is very strong, and can overpower a dish if you use it more. At best, one or two cloves is all it takes for most dishes, and just a pinch, if you are using it in the powder form.

Edible Flowers To Boost Your Health

Edible Flowers To Boost Your Health