Cycling – More Than Just An Exercise For Seniors 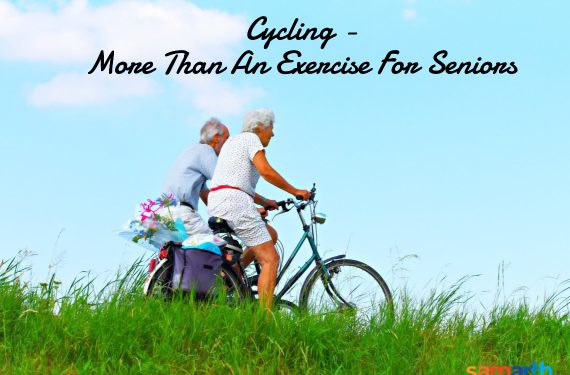 Typically, when we discuss exercise regime for seniors, we talk about Yoga, walks, jogs, stretches, etc. However, we have also read a few inspiring stories about senior marathon runners and swimmers, who started their athletic career after 60 and have achieved commendable success. But, we do not talk about cycling as a mode of exercise for seniors. In the cities now, we see that cycling is catching on as a trend among the youth, for exercise as well as to try and be easy on the environment.

While in India, we still do not look at cycling as a mode of transport, there are a few Western countries that pride in this. But, is cycling a good option for seniors, or would it add to their aging issues?

What does the research say?

Incredibly, some new research conducted on this topic seems to suggest that the senior people who cycle can benefit from it. While our understanding of aging shows that humans typically tend to lose muscle as we age, this study has found that cycling can actually slow down the aging process and help keep the muscles healthy and can help the immune system behave like in the younger population.

The details of this study have been published in many leading newspapers and magazines, across the world on the effect of cycling on older adults and its impact on aging. Interestingly, there are also studies that have conclusively suggested that cycling can help people live longer by reducing the risk of cardiovascular diseases, as well as diabetes and cancer.

The general perception among the people, especially the older population though, is that cycling may be an intense exercise, not meant for them, while the studies seem to suggest otherwise. Perhaps, the awareness is a bit low on this aspect.

Note: Any new form of exercise can only be attempted after due consultation with your doctor, especially if you have any specific medical conditions.

The benefits of Cycling

The benefits that seniors derive from cycling are many, as it is a form of aerobic exercise. It is a low impact exercise that can provide better impact from the energy utilized in pedaling, which is a steady and smooth movement. In cycling, while the muscles are engaged in the activity, there is no stress on the joints involved, while it helps keep the cartilages healthier.

Cycling is a whole body exercise, and one need not be an adventurous person and go the long distance or tough terrain kind of routes. Flat routes on a slow and controlled pace, for short distances, can provide better results than jogging. It is a highly beneficial cardio exercise, while also helping to maintain body weight, as it burns fat too.

Cycling is a ‘feel good’ kind of exercise that will release dopamine (called the happiness hormone) and overall can put us in a good mood. It gives a sense of confidence, helps to relax, and also provides a sense of achievement. It also helps improve the blood flow to the brain and thus helps in the brain health as well. This has been corroborated by a study that says 30 minutes of cycling can help people to remember things, reason and strategize better as well.

In general, it has been understood that people tend to lose gray matter in the brain, leading to diseases like Alzheimer’s. However, aerobics exercises, including cycling may increase both the white and gray matter in aging people, and that could be another reason why researchers suggest that it may be a good exercise for seniors. Stationary or exercise bikes are also a good option for seniors who would like to take to cycling. And this can be discussed out with certified gym and exercise trainers. It promotes stamina, strength, and mental health while being easy on all the joints, as it is a low impact option.