The Best Time To Go Vegan 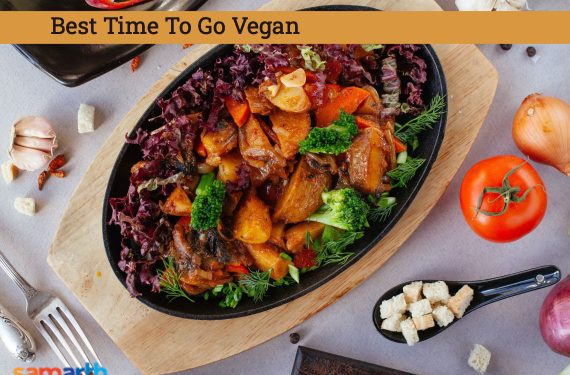 If you have been considering going Vegan, perhaps this is the best time to do so. On 1st November, World Vegan Day is being celebrated, and the month of November as the Vegan month. The Vegan followers are urging their friends and family to try it out by going Vegan for a month in November by taking the Vegan Pledge. There are a series of events happening across the world on this account. Through all these initiatives, the Vegans are striving to create awareness among the humans about not exploiting animals and to avoid all animal-based products consciously.

Many people have the misconception of Veganism being the same as vegetarianism. But, that is not the case; it goes much beyond that as the philosophy advocates against ‘exploitation of, and cruelty to, animals for food, clothing or any other purpose’. So, the Vegans follow a plant-based diet and also avoid dairy and poultry products, eggs, and honey. They don’t use products tested on animals, or materials derived from animals as well. That means they avoid leather, silk, fur, many cosmetics, etc.

They aim to urge humanity to find alternatives to such products and learn to be kind to animals. They do not visit zoos or aquariums or attend animal racing. Nor do they support using animals in any form of entertainment. It is actually a way of life; one that is not so tough to follow, and yet not so easy as well. Vegans try their best to follow their principles, though there are times when they may trip up unintentionally, and that is not taken as a crime, and they continue to follow the Vegan pledge they have taken.

The concept of Veganism is very ancient, though not documented as such. However, the modern Vegan society is traced back to 1944, and the thought towards the definition of Vegan was started by Leslie J Cross in 1949. The society was first registered in 1964 and became a limited company in 1979. The early definition also evolved to what is being practised today by the Vegans all over the world. Louise Wallis started the World Vegan Day event, then Chair of The Vegan Society in the United Kingdom, to commemorate the 50th anniversary of the founding of the organization in 1994.

The society provides a complete guide on how to Vegan, and even have Vegan recipes that you can try out. You may be surprised to know that there is an alternate that can be used for almost all animal products used. They also have a Vegan shop which sells all products certified as Vegan that include food supplements, accessories, gifts, and more.

So, are there any benefits to be had from going Vegan other than being kind to animals? Based on research, the benefits of a Vegan diet are:

1. A reduction of risk of heart diseases by 42%, as the Vegan diet lowers cholesterol levels.

3. Weight loss (for a healthier you).

A Vegan diet is said to be richer in certain nutrients; however, there is always a chance that if not planned well, you could be malnutritious or overweight as well. Hence, it is good to know what your body needs, and find sufficient Vegan alternatives to provide all essentials that the body needs. This is true for any diet that one may follow that you need to know what to avoid and what to eat and how much in quantity.

Spice it up with Curry Leaves