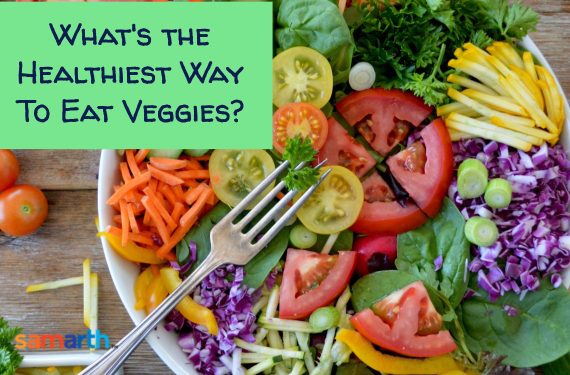 It’s an accepted fact that at all ages, we need to eat veggies to stay healthy, enhance immunity and keep infections at bay. And yet, except for the few that we like, it still is a challenge to a variety of vegetables daily in a nutritious way. The taste, the texture, the effort and so on are the excuses we use to avoid vegetables, even when we know that it is a must for our balanced diet.

It may be interesting to know that it is not just enough to include veggies in your meals. For deriving maximum nutrients from a vegetable, you also need to prepare them in some specific ways. This may differ with each vegetable, but most vegetables indeed lose nutritional value depending on how you cook them.

Vegetables like onion, beetroot, cucumber, sprouts, corn, green peas, coloured bell pepper, and even garlic are best eaten raw. It is also true though, that cooking makes certain vegetables more nutritious and easily absorbable. For example, the beta carotene levels in carrots increase when boiled, while steaming decreases the Vitamin C levels. So, the best way to eat veggies is to plan a mix of eating raw and different cooking methods like steaming, boiling, sautéing/stir-frying, and microwaving, depending on the vegetable.

Many vegetables like the ones mentioned above are best eaten raw to get the maximum nutritional benefits. When eaten raw, these veggies retain their natural structure that keeps most of their nutritional value safe. It also retains the water in the veggies, which is better. One of the biggest drawbacks of cooking veggies is the diminishing Vitamin C content. This Vitamin starts breaking down as soon as it is exposed to heat.

This is also true of Vitamin B, which is another water-soluble Vitamin. So, the water used to boil it may contain more Vitamins than the vegetable. Studies have proved that antioxidants, too, break down during cooking and will be lost. In certain vegetables, it was noted that up to 50% of the antioxidants were lost in boiling. Hence, eating veggies raw is a good option to ensure good health. However, there are some exceptions to eating raw veggies. Potatoes, cruciferous veggies, mushrooms, eggplant, French beans, asparagus, bottle gourd, and spinach should not be eaten raw.

Steaming is a good alternative to boiling veggies. It helps retain the water content and most of the nutritional value of the vegetable. The best strategy to cook veggies is to keep cooking time and temperature minimum and to avoid water. Steaming meets that criteria perfectly. A study conducted with broccoli using different methods like boiling, microwaving, steaming, and stir-frying showed that steaming retained the highest level of nutrients.

As a rule, it is best to cook vegetables wholly, as cutting them does reduce the nutritional value. So, there again has to be a balanced approach to cooking veggies wherein you should cut them into large uniform pieces. It may not be suitable for the aesthetics of dishes, but certainly a healthier option.

A compromise option of retaining nutrients as well as taste may be to stir-fry them. This will be faster, and since you won’t use water, it will be more nutritious and healthier. Use less oil and spices and cook covered to ensure that the rawness is just gone, and the veggies may still be crispy and crunchy. Sautéing veggies also increases the absorption of the phytonutrients like phenols and carotenes.

More or less like steaming, sautéing also avoids water, temperatures are not high, and the usage of little oil helps with the absorption of fat-soluble nutrients. One study found that the Mediterranean diet ( which included sautéed veggies with Olive oil) had the best effect on cardiovascular health.

Contrary to popular myths, microwaving veggies isn’t all that bad; it helps retain the nutrients and even increases the same in certain vegetables. It all depends on the vegetable and the time and temperature used. One study established that vegetables like broccoli, eggplant, green beans, onions, and spinach retained their nutrition after baking. Tomatoes became more nutritious after roasting them. Tomatoes should be cooked as a whole and never peeled or deseeded to get maximum health benefits.

Microwaving helps retain the natural structure and water quantity in the vegetables. However, bell peppers were seen to lose their antioxidant levels on microwaving. Spinach loses up to 70% of the folic acid on boiling, while it is retained almost fully if microwaved. Stove-top steamed broccoli retained more of the cancer-fighting components than micro-waved one, though.

It is a known fact that almost all cooking processes can make our veggies less nutritious. Therefore, it is best to know which vegetables can be cooked in which way and mix it all up to try and maximize the health benefits derived from it.