Pillars of Hinduism -The Four Vedas 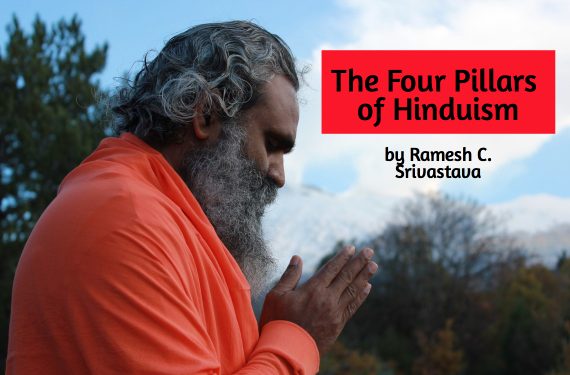 In Hinduism, VEDAS means wisdom, knowledge or vision, and it manifests the language of the Gods in human speech.

The laws of the Vedas regulate the social, legal, domestic and religious customs of the Hindus to the present day. All the obligatory duties of the Hindus at birth, marriage, death etc. owe their allegiance to the Vedic ritual. They draw forth the thought of the successive generation of thinkers, and so contain within it the different strata of thought.

Origin of the Vedas

The Vedas are probably the earliest documents of the human mind, and it is indeed difficult to say when the earliest portions of the Vedas came into existence. As the ancient Hindus seldom kept any historical record of their religious, literary and political realization, it is difficult to determine the period of the Vedas with precision. Historians provide us many guesses but none of them is free from ambiguity.

Who wrote the Vedas?

It is believed that humans did not compose the revered compositions of the Vedas, which were handed down through generations by the word of mouth from time immemorial. The general assumption is that the Vedic hymns were either taught by God to the sages or that they were revealed themselves to the sages who were the seers or mantradrasta (who have seen the Mantras i.e. holly chanting) of the hymns.

Classification of the VEDAS

The Vedas were mainly compiled by Vyasa Krishna Dwaipayana around the time of Lord Krishna(1500 BC). The Vedas are four: The Rig-Veda, the Sama- Veda, the Yajur- Veda and the Atharva- Veda, the Rig Veda being the main. The four Vedas are collectively known as”Chaturvedas.”

Structure of the Vedas

Each Veda consists of four parts, the SAMHITAS (hymns), the BRAHMANS (rituals), the ARANYAKAS ( reading of religion), and the UPNISHADS (philosophies).

The collection of mantras or hymns is called the Samhita. The Brahmans are ritualistic texts and include precepts and religious duties. Each Veda has several as attached to it. The Upanishads form the concluding portions of the Veda and therefore called the Vedanta or the end of the Veda and contains the essence of Vedic teachings. The Upanishads and the Aranyakas are the concluding portions of the Brahmans, which discuss philosophical problems. The Aryanyakas (forest texts) intend to serve as objects of meditation for ascetics who live in forests and deal with mysticism and symbols.

The Rig Veda (The Book of Mantra)

The Rig Veda is a collection of inspired songs or hymns and is the main source of information on the Rig Vedic civilization. It is the oldest book in any Indo-European language and contains the earliest form of all Sanskrit mantras that date back to 1500 B.C. – 1000BC

Rig-Vedic samhita or collection of mantras consists of 1,017 hymns or suktas, covering about 10,600 stands divided into eight astakas, each having eight adhayayas or chapters, which are sub-divided into various groups. The hymns are the work of many authors or seers called rishis. There are seven primary seers identified: Atri, Kanwa, Vashistha, Vishwamitra, Jamadagni, Gotama and Bharadwaja.

The rig Veda accounts in detail the social, religious, political and economic background of the Rig-Vedic civilization. Even though monotheism (believing in one God) characterizes some of the hymns of Rig Veda, naturalistic polytheism (belief in many Gods), monism can be make out in the religion of Rig Veda.

The other three Vedas viz Sama, Yajur & Atharva were compiled after the age of Rig Veda and are ascribed to Vedic Period.

The hymns of the RIGVEDA reveal that the foremost God of Aryans is INDRA, a war God and a great slayer of demons and animals. VISHNU appears in the RIGVEDA as a SUNGOD, who occasionally helped INDRA to slay demons. SHIVA played a little role during that period, and who, under the name RUDRA, prowling in the mountains, killed humans and ASURAS with the help of arrows, and thus causing cure and disease.

The Sama Vedas (The Book of Song)

The Yajur Veda (The Book of Rituals)

The Yajur Veda is also a liturgical collection, used for public performance, and was made to meet the demands of a ceremonial religion. The Yajur Veda practically served as a guidebook for the priests who execute sacrificial acts muttering simultaneously the prose prayers and the sacrificial formulae (yajus) it is similar to ancient Egypt- Book of the Dead.

The last of the Vedas, ATHARVE VEDA is completely different from the other three Vedas and is next in importance to Rig-Veda with regard to history and sociology. A different spirit pervades this Veda. Its hymns are of a more diverse character than the Rig Veda and are also simpler in language. In fact, many scholars do not consider it part of the Vedas at all. The Atharva Veda consists of spells and charms prevalent at its time and portrays a clearer picture of the Vedic society.

It’s Time For Young Friends Too!